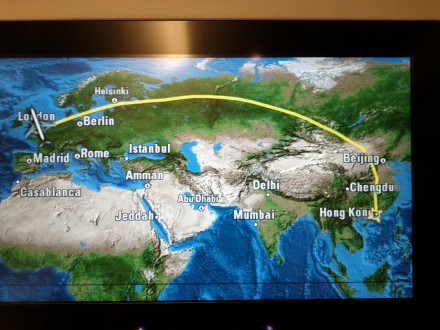 I spent Thursday trying to figure out how to get from my hotel in Shenzhen to Hong Kong International Airport. Again, the ferry was a tempting route, but still too much uncertainty, and I didn’t have the time to get to Shekou and scout around and recon, nor was I confident about my knowledge about how it works.

I looked around for a bus that picks up from my hotel, and I did find one, but it was every hour, and exits via Shenzhen Bay, getting to the airport after a 2 hour trip. Other information was very limited on line, like the cost and how to know what bus to get.

I dug back into the Web about the Huanggang Border Checkpoint, since that’s where I entered Shenzhen, it made sense there should also be a reverse route back. Huanggang is the largest border point in Shenzhen, the Hong Kong side is called Lok Ma Chau. It’s the primary route for pedestrians crossing the border.

The main process of exiting Shenzhen back to Hong Kong is:

There are a number of ways through that process, including a full customer service limousine experience costing 1700 RMB (about £190) right down to doing it on foot (effectively free).

I think how it works is that everyone has to go by foot through the Shenzhen passport control. Then on the departure side of that you can get on a bus, taxi, people carrier to the next stages.

The bus that stops as Lok Ma Chau sounds tempting, but there is a risk you need to be aware of (judging from the comments and stories on the web). You store your luggage on the bus, and at Lok Ma Chau you have to get off the bus to go through the Hong Kong Passport Control, leaving your luggage on the bus. If you get held up, or take longer than expected through the Hong Kong Passport Control, the bus is liable to leave without you, with your luggage still on board. It isn’t obvious then how to get your luggage back, or whether you have to pay for another ticket on a later bus. That wasn’t a risk I was prepared to take.

Another idea I had was to take the Metro from the hotel to Huanggang Checkpoint. So I gave that idea a run on Thursday, went from the Shopping Mall Metro station, to the Exhibition Center Metro station and then changing to the Longhua line for two stops down to Futian. I hoped there would be an easy access to Huanggang from the Futian Checkpoint, but I didn’t see it. And I don’t know enough about Futian Checkpoint to figure out how to get to Hong Kong International Airport from there. So I scrapped the idea of using the Metro.

Using transportation other than the Metro, then Huanggang is the logical choice for people in the Futian district. Louhu has it’s own border crossing, which is ideal for cross-border shopping trips in either direction. People in Shekou, the ferry is a useful alternative if your airline allows a check-in from that ferry port. There’s also what looks to be a scheduled bus route from certain hotels to Hong Kong International Airport via Shenzhen Bay, but details are a little scarce. The price looks about right (RMB 150), and the trip takes 2 hours.

So my plan was to take a Shenzhen taxi to the Huanggang Checkpoint, get through passport control, buy a ticket for a people carrier there. So almost the same method I entered, in reverse. The benefit of taking a people carrier service is that you and your luggage stay in the car through Lok Ma Chau, and the driver takes your passport and gives it to the controller at the drive-through checkpoint. That should cost me whatever the taxi fare is, plus another 170 RMB for the people carrier.

My hotel, Marco Polo Shenzhen, got me a taxi and told the driver where to take me. Perfect. I was in Huanggang Checkpoint inside of 20 minutes from leaving my hotel.

I was dropped off on the drive-through drop-off which is on the level above the ground floor, and the departure passport control in on the ground floor (judging from the signs). Going down the escalator I was greeted by a guy offering transport to Hong Kong International Airport, I though he was guiding me to departures, but he was actually selling me a ride from Shenzhen departures to Hong Kong International.

After establishing the price (150 RMB), that it would take me all the way to Hong Kong International airport, and someone would meet me the other side of Shenzhen passport control, I handed over the cash and got back a blue sticker for my t-shirt (so that staff on the other side could spot me), and a printed receipt clearly showing the amount paid and the destination. (Another thing to be careful is not to rent a people carrier for yourself, that will cost about 1700 RMB because you are paying for exclusive use of a people carrier. Prices around 150 RMB and 170 RMB mean you are travelling with other people, and that’s the way to go).

Then entering the departure lobby I got a bit lost looking for a Tourist or Foreigner lane because every other lane said “Chinese National”, until you looked away and looked back, and some of them say “Foreigners”. I had the wrong mental model (entry in Shenzhen they have separate aisles for foreigners and Chinese Nationals, so I assumed it would be the same thing). Leaving the distinction is made for groups (like tour groups), and individuals. The staff at Huanggang noticed me having my lost face on, and politely guided me to the right queue. It took about 30 minutes of queue shuffling to reach a passport control counter. Hand over my passport, and departure slip (the smaller part of the yellow slip I received in Hong Kong International and filled in en-route to Shenzhen 5 days before), and my best effort “Ni Hao”, the slip and passport were stamped, and I received my passport back. Then through the “Nothing to declare” channel of customs, and through a busy exit.

Again, the staff of the people carrier travel service (the same Go Go Bus company I used to get me to Shenzhen) spotted me and guided me to the car that would take me to Hong Kong. There were already five people waiting, which means there wasn’t long to wait before we got started. We were in a 7 seat people carrier, but were quickly moved to a six-seat one, since then we had a full complement of passengers going to Hong Kong airport.

I quickly filled out the Hong Kong arrivals slip that the travel service company provided me with (the same type I filled out on the flight to Hong Kong, a triplicate departure card), and handed that along with my passport to the driver just before we reached the Lok Ma Chau checkpoint. I was in the backseat this time so I could see the process. Driver hands over all the passports, which the clerk visually checks the picture with each passenger, and then takes the main copy of the departure card. While he is doing that the main passenger door is open and a security guard pointing a sensor of some sort at each passenger in turn.

And so, the introverted cautious me is sitting in Hong Kong Airport 5 hours before my flight is to depart. And the departure boards show all the flights leaving in the next 2 hours. I am very early, which is fine, because I am exactly where I need to be, and there is zero risk of me not making the check-in gate late. I have heard horror stories on taking 5 hours to get from Shenzhen to the airport – using a special hire-car and driving through the Huanggang Checkpoints. The extra time would quickly evaporate if risks happened:

So I gave myself about 7 hours for the journey from my hotel room to Terminal 1 in Hong Kong. And it was plain sailing all the way and took only 2 hours almost stress-free. Now I can relax, and try to figure out how I’m going to deal with flying against an 8 hour time-zone difference. I’ve been up since about 7am Shenzhen time, and will get home about 11pm UK time, so I am living a 24 hour day today. Only 20 more to go. It will be at least another hour before I can check in my main luggage.