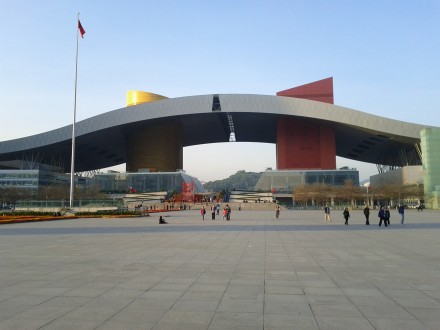 I spent this afternoon walking around the Shenzhen Convention and Exhibition Center. It is one of the most recognisable buildings in Shenzhen, and is the heart of Shenzhen. It’s about five or six blocks from my hotel, but with the ongoing construction work there isn’t a straightforward route to it. At least the Exhibition Tube station means there’s a subway underpass for pedestrians under the busy Shennan Avenue.

Emerging from the subway you are greeted by a huge square plaza. Crowds of people were there taking tourist photographs, as well as groups of people rollerblading. It is an ideal spot for rollerblading, flat, smooth and huge.

As you climb the steps of the Conference center you start to see the immense size of the space. The entire space is raised above the street level, so it covers about 6 city blocks right into the Park at it’s northern most point. The conference center itself is quiet, but all around there are families enjoying the day outdoors. There’s a group of guys breakdancing under the vast roof.

Kites are a popular outdoors activity in Shenzhen. I first noticed them when trying to find my way to Lianhuashan Park on Monday evening. It’s the busiest place in Shenzhen this week, as crowds of people are picnicking there while their kids are flying kites. That’s a pleasant surprise.

I saw a guy on a bicycle selling turnips. How odd, I thought. Then a few minutes later there was this fabulous smell wafting through the plaza. Do roast turnips smell that good? People we buying them.

Since this is the biggest gathering of people I’ve been with during my trip, I got quite a few looks, and greetings because I obviously stand out. It’s been fine, it’s all been very lighthearted, very welcoming, it’s just curiosity. One kid asked to take a picture of me the second time our paths crossed, so I did my best Spock greeting.

The moments I’ve enjoyed are seeing kids and their parents together, in shopping centres, in theme parks, in open-air plazas, in parks. There’s something refreshing, that I don’t see in the UK any more. I admire that, that sense of family, that sense of togetherness. I’m most likely being naive, but isn’t that what naivete is, looking for the good side of things. And maybe sometimes, you do find it. Not all the time, but when it counts and when it matters.