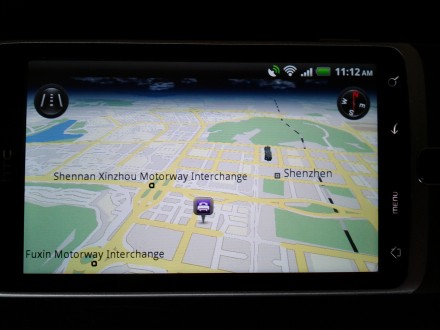 Shenzhen doesn’t have a London-like A-Z that I could find. And since it’s a relatively new city growing in leaps and bound, maps are very quickly going to be out-of-date, inaccurate, or missing useful travelling information (e.g. Metro stops). So I looked out for a few alternatives.

At the most primitive, the day before I flew out, I went to Google Maps, full-screen on my 27″ iMac, and took multiple screengrabs of the Google Maps’ view of Shenzhen, and copied them to my netbook and my Nexus 7. That way.

I also took screenshots of chachaba’s 3D map of Shenzhen. In a city of uniquely architected skyscrapers, it’s going to be a useful navigation cue if the signs are unreadable to me.

So worse case, I have a digital static map offline if nothing else worked.

The Android Google Maps app offers saving maps offline, so I saved an offline copy of a map that covered all of Shenzhen I was likely to visit. It’s a 28Mb download. I saved offline copies on my Nexus S phone, and my Nexus 7 tablet. The phone download refused to complete, so it was unusable.

The tablet proved the right device for an offline Google Maps. The offline capability did work on this device, so I had a static map I could pan, scroll and zoom through. But the finding my current location didn’t work for me, it kept insisting it needed a data connection.

So this is an improvement on the digital static map offline, but not by much.

I bought a second-hand phone off eBay a few weeks ago, it’s an HTC Desire Z. I bought it with the idea of getting a Chinese sim card during my stay, and one with a data plan, so I could use it with Google Maps. From serpentza’s video on buying and topping up sim cards he was using this phone, with Google Maps using a China Unicom sim card. So I aimed to replicate that. I know the Desire Z is an old phone, but with a flip-out keyboard it’s an interesting device, and I’d feel safer carrying around a second hand phone than say, and iPhone 4.

Now, I didn’t get to the point of buying a sim card – I needed someone to help me with that. But, I discovered something unexpected. HTC have their own map application called Locations. It’s not available on the Android App Store. This application is awesome.

Locations allows you to download high-quality maps of a list of cities and areas. I downloaded maps for UK, Hong Kong, and Guangdong province (where Shenzhen is). These maps are big, about 280Mb for Guangdong. Locations offers a 2D and 2.5D “driving” map perspectives. It works offline. It works with GPS on the phone (without a data-plan or sim card), so you can get the phone to show you a 2.5D map of where you are right now. The second very useful feature is a compass, and the map rotates as you turn around. So you see the map as you see the road in front of you. It works quite well while driving too, so what you already have in a TomTom or Garmin device. That’s what Locations brings when offline.

The combination of an offline map that works with GPS and rotates based on a compass is a killer set of features for the geek traveller. It’s what made me exploring Shenzhen possible. So everyday, I took both my phones with me, my Nexus 7 to take pictures, and the HTC Desire Z for navigating.

I’ve accidentally uncovered a gem in the HTC Desire Z – well I guess any current HTC phone has these features. But it’s the HTC-specific app, Locations, that melds everything together into a very capable and handy tool for me.

Although there are a few little gotchas with GPS positioning in China. There are mutterings online that GPS location services are out by about 40-100 meters in China. I don’t know if this is the case.

Every once in a while the app suggested I was located several miles out in the South China Sea. It was only when I was at the Futian Checkpoint yesterday I figured out what the problem was. The Guangdong map ends right at the Shenzhen/Hong Kong border, everything outside of Guangdong is blue, like the South China Sea. At Futian Port, the phone kept flipping to the Hong Kong map. So there is some resolution inaccuracy in GPS signals. And it gets very noticeable when you are at the edge of a map. Perhaps if HTC could extend their Guangdong map a little distance outside of Guangdongs’ borders it would mitigate this problem slightly.

I thought skyscrapers may present a problem, and sometimes the GPS would tell me I was a block or two further away from where I knew I was. These little niggles happen, but overall I found it got my location right a lot more than it got it wrong. But I took care to be in an open area, not too close to skyscrapers. You know, just be logical.

I didn’t get to a working data plan. With the usefulness of the HTC Desire Z plus the Locations app I really didn’t need it.

So being an introvert, and the need to know where I am, I had sufficient options to allow that. Certainly, not needing to ask for directions avoids the language barrier and the introvert barrier. Left to my own devices, and my devices succeeded. But, only because of HTC’s Location app on an HTC device with working GPS, compass, and enabled offline maps of Shenzhen. Travelling has improved considerably since the days of fold-up maps, and visiting a newly created city means the symmetry of design is pretty consistent, so there were no real surprises to worry about. Me and my GPS. Thanks HTC!